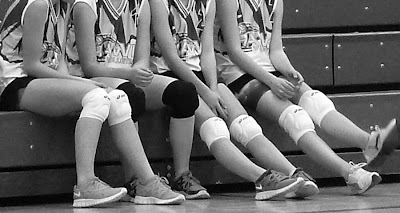 Later today I am going to go watch my daughter Emma play in a middle school volleyball game. It thrills me to no end to see her out there on the court whacking that ball, or missing it completely – but at least giving it a good try.

When I was her age, thirteen, I had an incident with volleyball that ruined the sport for me for life. I haven’t touched a volleyball since. Must have been tragic you say? Well, I’ll let you decide but I will say that when I told my girls about the incident they were like “Mom! You let THAT make you never play volleyball again! GEEZ!” So, maybe I am a little more sensitive than most. Anyway . . . the story…

So, there I was. Thirteen, small for my age, quite shy, and brand new at this Junior high school having moved to the area the summer before. Now throw me in to a coed unit in P.E. and we’ll see how I do (seriously folks, why do they this to 13-year-old kids? It’s just not kind). The square dancing was tolerable and then we started volleyball.

I’d never played before but I could usually hit it over the net with minimal bruising on my arms – still I wasn’t a stellar player and I was feeling very self-conscious about that. The last day of the unit we divided into our coed teams and started a game. The ball was back and forth and back and I was just mostly trying to defer to the stronger players when someone yelled “heads up!” and the ball came down from quite a height and whacked me squarely on the head (and super hard I might add). Because he was thirteen and loud and popular Kelly Green, a boy on my team started laughing up a storm. I mean he was doubled over slapping his thighs and punching other guys in the arm as if to say “wasn’t that awesome?!” I think he even said something to me like “Way to go idiot.” Anyhow, as everyone stopped and laughed along with Kelly Green I could feel the blood rising in my face and I told myself that I sucked at volleyball and then swore I would never play volleyball again. And I haven’t.

Now, as someone who’s had nearly 30 years to ponder this event and who has a thirteen-year-old of her own, I feel a little miffed at my younger self. I mean the guy’s name was Kelly Green for pete’s sake! Why didn’t I say something like “Shut up you big 'Crayon'”  – or . . . okay, maybe not THAT, but something! I could’ve even gone with a more grown-up approach like “Excuse me but your comments are hurtful and mean.” But I didn’t say anything darn it.

The crappy part is that Kelly Green undoubtedly has no recollection of me or of this event but I’ve let him keep me from enjoying this beachy sport, which my daughter, by the way, says is tons of fun! Shame on him for being so unkind – but mostly shame on me for letting him win.

Now off to the game. May my daughter (and all thirteen-year-old girls everywhere) always feel strong and capable and confident – even if the ball hits her squarely on the head.
Posted by Jenny