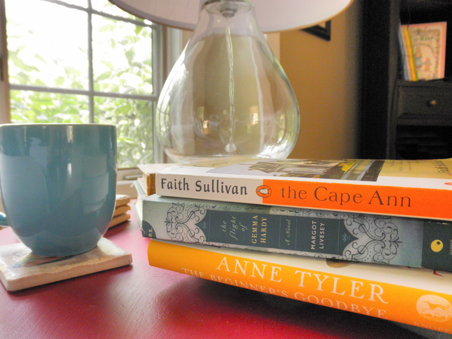 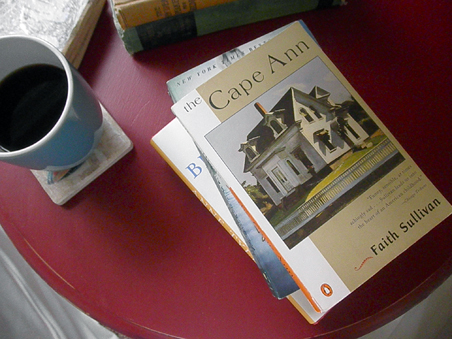 Books and Summer, they go together so nicely, don't they? Actually, books go quite nicely with pretty much everything: diet coke, fluffy beds, sandy beaches, baths, porches, couches, cooking, candles, waiting in cars, Saturdays, coffee, tea, snuggly pets, snow, rain, chocolate, lunch breaks. I have a friend who reads while she blowdries her hair in the mornings. I haven't tried that because if I take care my hair can get really huge and outta-control crazy.

I've done a fair amount of reading this Summer and thought I'd give a little report on a few books I'd mentioned in earlier posts.

1. The Beginner's Goodbye by Anne Tyler

I must start by saying that Anne Tyler is among my most favorite writers. Her writing epitomizes the writer's creed of "show, don't tell." Her characters are endearingly eccentric, and so real they could be any one of us. Their lives are all at once ordinary and extraordinary, which I believe is true of us all. When I first began reading her books, some twenty years ago, I was appalled. I was used to tidy, happy ending types of stories and Anne didn't deliver. I would reach the last page and gasp in horror ~ how could she just end it right there? I longed for something more. But then I began to see the beauty of these endings. Her books were like spending snippets of time walking side by side with her characters. In the end you walked away, but their lives would go on evolving and moving through time, just like our own lives do. Life isn't tidy, it's dynamic and there is always a bit of bitter mixed with the sweet. There's no such thing as perfection, totality, happy ever afters.

Whew! Now, on to The Beginner's Goodbye.

Crippled in his right arm and leg, Aaron spent his childhood fending off a sister who wants to manage him. So when he meets Dorothy, a plain, outspoken, self-dependent young woman, she is like a breath of fresh air. Unhesitatingly he marries her, and they have a relatively happy, unremarkable marriage. But when a tree crashes into their house and Dorothy is killed, Aaron feels as though he has been erased forever. Only Dorothy’s unexpected appearances from the dead help him to live in the moment and to find some peace.

Gradually he discovers, as he works in the family’s vanity-publishing business, turning out titles that presume to guide beginners through the trials of life, that maybe for this beginner there is a way of saying goodbye.

A beautiful, subtle exploration of loss and recovery, pierced throughout with Anne Tyler’s humor, wisdom, and always penetrating look at human foibles.

My thoughts: This was a lovely book. Heartbreaking in parts and filled with Tyler's quirky characters and attention to life's small details. It's an easy read (and a rather small volume) and if you enjoy tidy endings I thought this one was maybe the most nicely packaged "finish" that Tyler has every written. My only complaint: I felt the main character, who was supposed to be in his 30's, acted more like a 50-year-old and it was a little distracting to me at times.

2. The Cape Ann by Faith Sullivan

Lark Erhardt, the six-year-old narrator of The Cape Ann, and her fiercely independent mother dream of owning their own house; they have their hearts set on the Cape Ann, chosen from a house catalog. But when Lark’s father’s gambling threatens the down payment her mother has worked so hard to save, Lark’s mother takes matters into her own indomitable hands. A disarmingly involving portrait of a family struggling to stay together through the Great Depression, The Cape Ann is an unforgettable story of life from a child’s-eye view.


My thoughts: The Cape Ann is a beautiful, well-written masterpiece. I will never forget little Lark, her strong, determined mother or the other characters in this book. Not since To Kill A Mockingbird have I felt so moved by the voice of an innocent (but wise) child narrator. I would consider Sullivan's book worthy of being called a literary classic. I highly recommend The Cape Ann to anyone looking for a moving, satisfying read.

3. The Flight of Gemma Hardy by Margot Livesey

Taken from her native Iceland to Scotland in the early 1950s when her widower father drowns at sea, young Gemma Hardy comes to live with her kindly uncle and his family. But his death leaves Gemma under the care of her resentful aunt, and she suddenly finds herself an unwelcome guest. Surviving oppressive years at a strict private school, Gemma ultimately finds a job as an au pair to the eight-year-old niece of Mr. Sinclair on the Orkney Islands—and here, at the mysterious and remote Blackbird Hall, Gemma's greatest trial begins.

My thoughts: It's not often that I say I really don't like a book, but honestly I did NOT like this book at all. It's basically a straight retelling of Jane Eyre with some lame-o plot changes and detail substitutions – a lousy rendition of a truly beautiful classic. The plot changes Livesey made were bizarre and uncompelling and ofter-times unbelievable! Supposedly this adaptation takes place in the 1950s but the language Livesey used sounded more like she was writing during Bronte's times. The characters were unlikeable. The writing was mediocre and downright bad in many parts. Ugh! I could just yammer on and on about how disappointing this book was. Maybe I was just being overly critical and comparing because there seem to be plenty of positive Amazon reviews, but honestly I thought this book was really lame. If you're in the mood for Jane just reread the fabulous original.

Well, guess I got a little long-winded on this post. So, what are you reading these days? I'm constantly collecting new titles for future reading. Oh and if you've read any of these books and have thoughts, I'd love to hear them. Feel free to agree, argue or tell me I'm insane.

As always, thanks for reading!